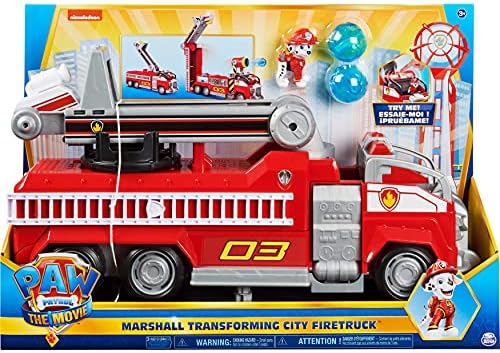 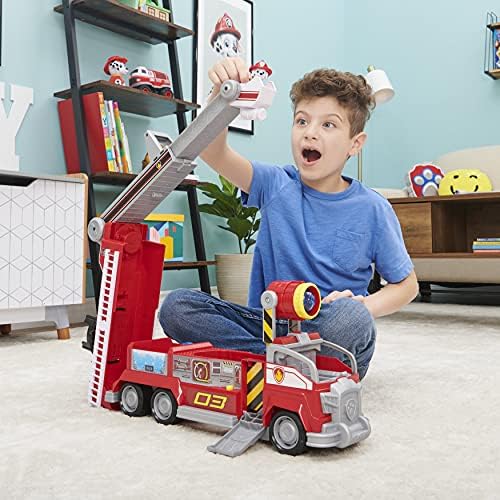 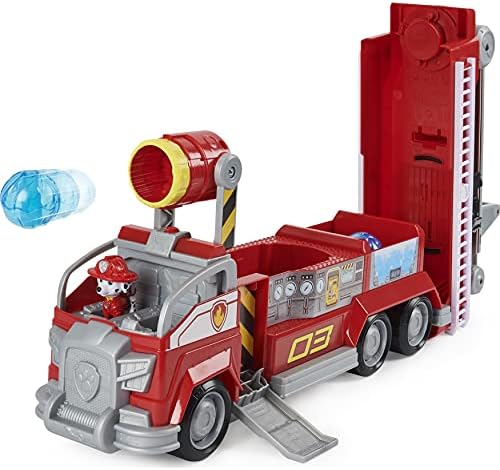 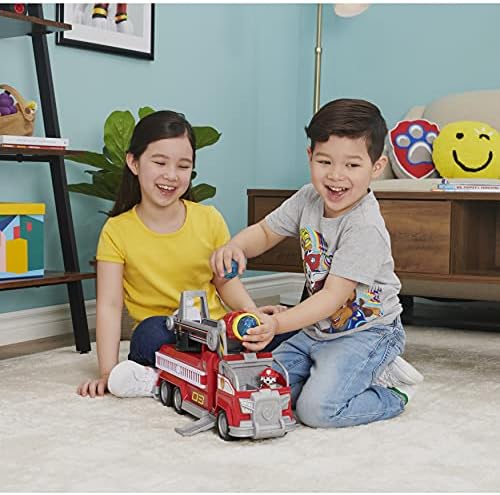 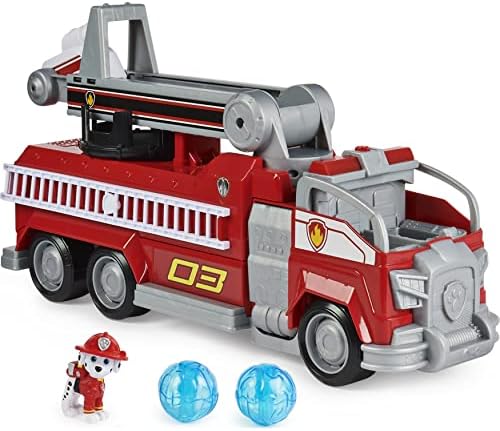 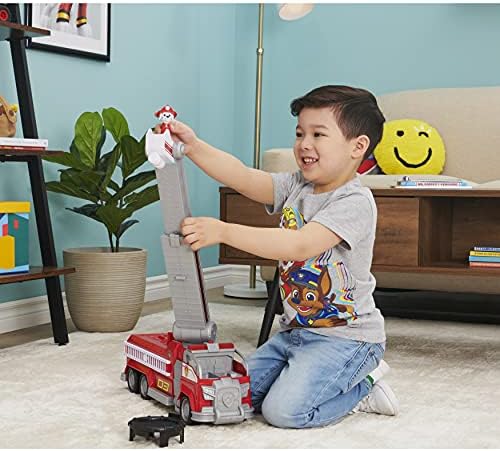 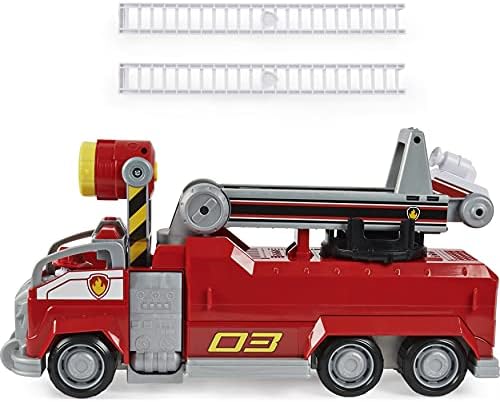 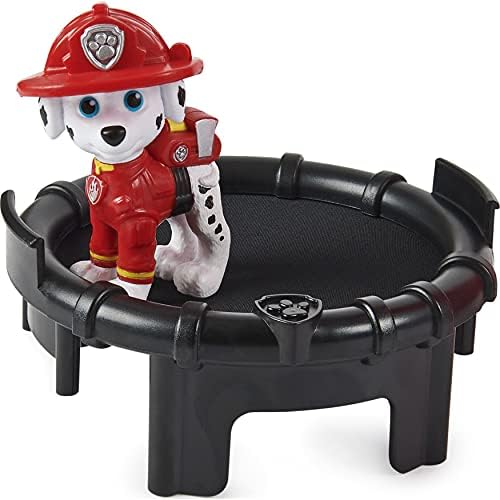 Bigger, bolder rescues call for the ultimate PAW Patrol rescue vehicle: Marshall’s Transforming City Fire Truck! This incredible fire truck toy brings Marshall’s truck from PAW Patrol: The Movie to life. Epic transformations, an extendable and rotating rescue ladder, massive water cannon launcher, flashing lights and realistic sounds make this PAW Patrol toy the perfect way to play out your movie-inspired rescues! Load the included Marshall action figure and another pup from your collection (additional PAW Patrol figures sold separately) into the cab and race to the rescue. Roll up to the scene and transform Marshall’s truck by pulling back the top. Unable to reach the top of the building? It’s no problem for the ladder – it’s taller than the ladders on previous PAW Patrol vehicles! Rotate it 360 degrees and extend it to reach the tallest city buildings! Press the button on top of the fire engine for lights and exciting sound effects! Slide your friend in trouble down the ladder to safety, landing on the trampoline rescue net, then use the water cannon launcher to put out fires and take down obstacles. Push the button on the inside of the truck to make the launcher pop up! Load a projectile (two included) and press the button on the back to launch and save the day! For even more ways to play, this toy truck even has two detachable ladders to use in your adventures. After an action-packed day, store the projectiles inside the vehicle and close up the truck until your next mission. Marshall’s Transforming City Fire Truck is a great gift for kids and PAW Patrol fans. Includes 3 LR44 batteries. Bring home Marshall’s PAW Patrol The Movie Toys Transforming City Fire Truck and save Adventure City!
TRANSFORMING FIRE TRUCK: This PAW Patrol movie truck has epic transformations, just like in the movie! Lift the top back, rotate and extend the ladder and press the button to pop up the projectile launcher!
360-DEGREE ROTATING LADDER: The Transforming City Fire Truck’s ladder rotates 360 degrees and extends taller than ladders on other PAW Patrol toy cars – reach the tallest buildings in your rescues!
LAUNCH WATER CANNONS: Marshall’s truck has a huge water cannon launcher! Press the button inside the truck to activate. Load a projectile (2 included), press the button and launch!
LADDER SLIDE AND RESCUE NET: Slide toy figures down the ladder’s slide to safety and land on the rescue net! The truck even has flashing lights and realistic sound effects (batteries included)!
PAW PATROL MOVIE TOYS: PAW Patrol kids toys, action figures, toy cars and playsets are perfect gifts for birthdays and your holiday toy list 2021, for kids ages 3 and up, to create missions with their favorite pups!
Includes: 1 Marshall Transforming City Fire Truck, 1 Figure, 2 Projectiles, 1 Rescue Net Trampoline, 2 Removable Ladders, 1 Instruction Sheet
Covered by the Spin Master Care Commitment. See below for full details

Added to wishlistRemoved from wishlist 0
37 $